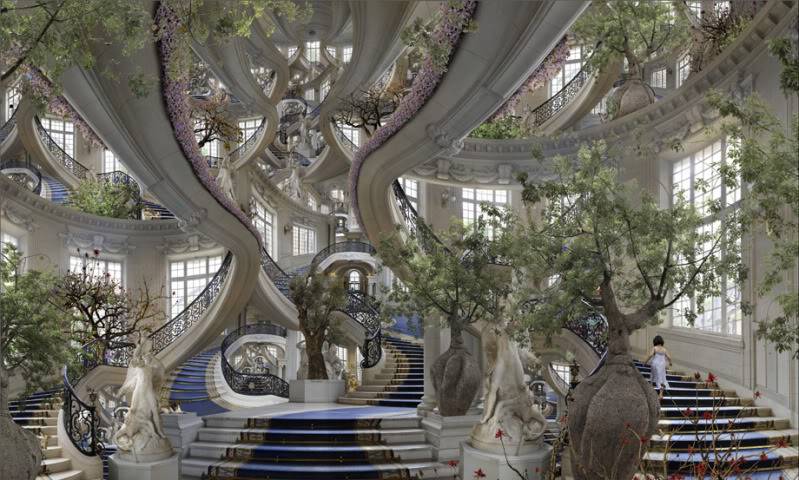 
Hyperphotos are to panoramic photos what Google Earth is to a globe. You can keep clicking and zooming and clicking and zooming, seemingly endlessly, until you find yourself on a dramatic balcony, looking up a statue’s nose. The more one zooms in; the more real the image begins to seem.

At the foremost of this evolving genre is Paris-based photographer Jean-François Rauzier, who has spent the last decade building photos of unprecedented detail. His latest images, which you can see below, are around 10,000 times the resolution of a normal photograph. Even at 66 feet wide, around the size of two school buses, his images are incredibly crisp.
As a fashion photographer in the 1970s Rauzier longed to break free from the constraints of advertising and film photography. Envious of moviemakers who engage viewers for hours, he wanted to capture everything before him in one image. But photographers had to choose: close-up or wide-angle. With digital photography he realized he could stitch together a grid of pictures, creating a far-flung panorama with a wealth of detail to rivet viewers.

Rauzier takes an hour or two photographing his subject from every angle “like a scanner.” Then the real work begins: days and nights with Photoshop, stretching, bending and multiplying hundreds, even thousands, of images and blending them seamlessly. Since the light changes as he shoots, matching colors presents another challenge. He takes additional liberties with the images, duplicating sections in symmetrical ways to create elegantly surrealist landscapes.

Sometimes he also incorporates himself, clad entirely in black. Although resembles Magritte’s man in the bowler hat, he insists he’s simply offering homage to Kafka’s heroes.
[url][/url]Paris-based photographer Jean-François Rauzier
_________________
There is no direct experience of reality without interpretation; and all interpretation is distorted by the cultural and personal prejudices or prejudgements of the interpreter.

Thank you so much E:

I appreciate you sharing your interests and knowledge.

You open the world up, right here!

His work is amazing. How beautiful.
I typed "Jean-François Rauzier" into Google images for an array of his work.
Thank you for sharing Elrick.

A Touch of Heart

Number of posts : 808
Age : 66
Location : Southern, California on a Indian Reservation. Search for truth in Spirituality.
Hobbies : Everything Spiritual, Machine Embroidery, Quilting, Writing Poetry, Computer and creative software, Writing, Artwork.....never bored.
Tell us about yourself : I’m a widow; I lost my spouse April 16, 1999 to a broken heart and Cancer. He was a Native American. I have lived on his Reservation in California for 37 years. We were married 23 years. We had two children, lost one to a drunk driver in 97 before my spouse died. I started my spiritual journey when son passed; but woke up to spirituality abruptly June 2009 when I had an event reading by James Van Praagh and he brought through eight deceased relatives. I would love to be a medium in the future, and share that spiritual connection with those who have lost. I take photos of spirits in clouds. One of my favorite spirit photographs at night is an apparition of a Native American Male.
Appreciation Points : 972
Registration date : 2013-02-18